Tom Kingston’s outfit trailed by six points early in the second-half at the DCU sports grounds and remained five behind with 13 minutes to go.

Yet despite losing Niall O’Leary to a straight red card in the 50th minute, they proved too strong for DJ Carey’s IT Carlow, hitting seven points without reply to win the game.

Conway was terrific for UCC in this period, scoring five of those seven points, while Cork stars Darragh Fitzgibbon and Shane Kingston grabbed the others.

That burst of scoring left UCC two clear at the death though Enda Rowland reduced it to the minimum when his shot at goal for IT Carlow was deflected over.

There was further drama in the 66th minute when IT Carlow’s Jerry Kelly, an AIB All-Ireland club finalist last month with Borris-Ileigh, attempted to level the game but his sideline cut drifted wide. 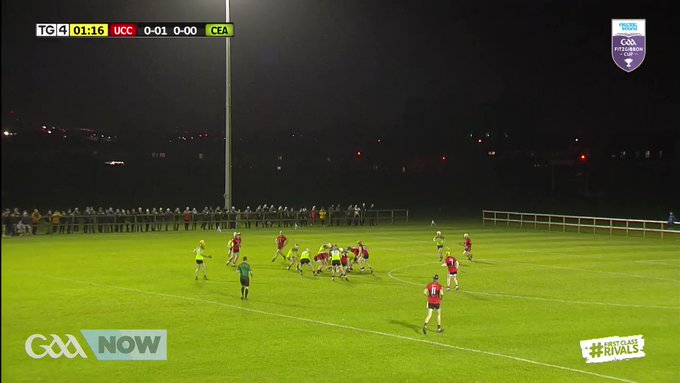 See The GAA’s other Tweets

With five goals scored in each of their last two games, quarter and semi-final wins over NUI Galway and Mary I, it was always likely IT Carlow would hit the net though two inside the opening eight minutes was particularly impressive.

In just their second ever final, the underdogs got the perfect start when Seamus Casey kicked to the net after a powerful run down the left in the second minute.

Chris Nolan added a point before Kilkenny’s Liam Blanchfield scored their second. He latched onto a delivery by Fergal Hayes, cut across the goals on a right to left run and then blasted home off his left side.

It left IT Carlow sitting pretty with a six point lead at 2-02 to 0-02 though UCC responded impressively, outscoring their opponents by 0-05 to 0-01 between the 13th and 25th minutes to leave just one in it.

It was a strong response from UCC given that they were playing into a stiff wind with Kingston having a great duel with Shane Reck and escaping his man for two points.

IT Carlow capitalised on the strong wind to boom over two points before the interval and led 2-05 to 0-07 but it remained to be seen how much the wind was worth to UCC in the second-half.

IT Carlow restarted with scores from Stephen Bergin and Nolan and were six ahead at 2-08 to 0-08 with just over 20 minutes to go but couldn’t hold on despite O’Leary’s dismissal for an incident that left Nolan grounded.